Turbulence Ahead: Market Review and Outlook

Turbulence Ahead: Market Review and Outlook

2022 marked one of the most dreadful years for investors in recent memory. Yearly returns for stocks and bonds clocked in at -19% and -13%, respectively, marking the first time since 1969 that both were down on a calendar basis.  In 2022, the ongoing battle with inflation dominated both headlines and trends in the market as the Federal Reserve rapidly increased interest rates to slow price increases.

Now with several consecutive months of easing inflation numbers, the Fed appears to be winning the war. However, this happens just as leading indicators suggest substantial economic slowing ahead. Much like a pilot trying to land a jetliner in turbulence, the Fed will move into its final phase of monetary tightening, and we will learn whether officials are able to engineer a smooth slowdown in the economy. While we believe much of the battle is behind us, we still expect turbulence ahead.

How Did We Get Here?

Where Do We Go Next?

With market turbulence and rising economic uncertainty, we closely monitor the ISM manufacturing index and the treasury yield curve—which have historically proven to be reliable indicators of a pending recession. Both continue to flash warning signs.

Driven by progressively tighter monetary policy, many leading economic indicators have decelerated rapidly, pointing to tougher conditions ahead for both consumers and businesses in 2023. 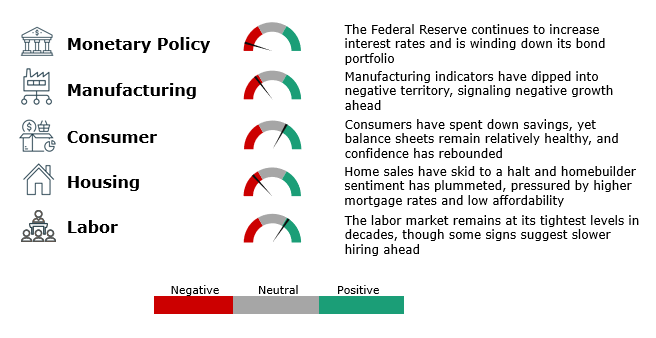 What Should Investors Do?

Last quarter, we identified two signs to watch for that would help indicate that we were nearing the end of this bear market: slowing inflation and a meaningful decline in earnings expectations.

The good news is that, given the weakness in both stocks and bonds last year, these markets offer much more value than they did just 12 months ago. Stock valuations, for instance, have come off their previously lofty heights. The current price-to-forward earnings ratio on the S&P 500 sits at 17.6x, in line with the index’s 20-year average. This suggests that some economic weakening is already baked into stock prices. And yields are much more attractive. The yield on the Bloomberg Aggregate Bond Index is 4.26% now versus 1.76% a year ago.

While we expect more turbulence ahead, investors shouldn’t wait for an all-clear warning before making an investment. Turbulence, like bear markets, often ends well before the pilot signals it’s safe to move around the cabin. Even the best pilots can have bumpy landings if skies are turbulent enough. A well-diversified portfolio can be an investor's best form of a seatbelt.